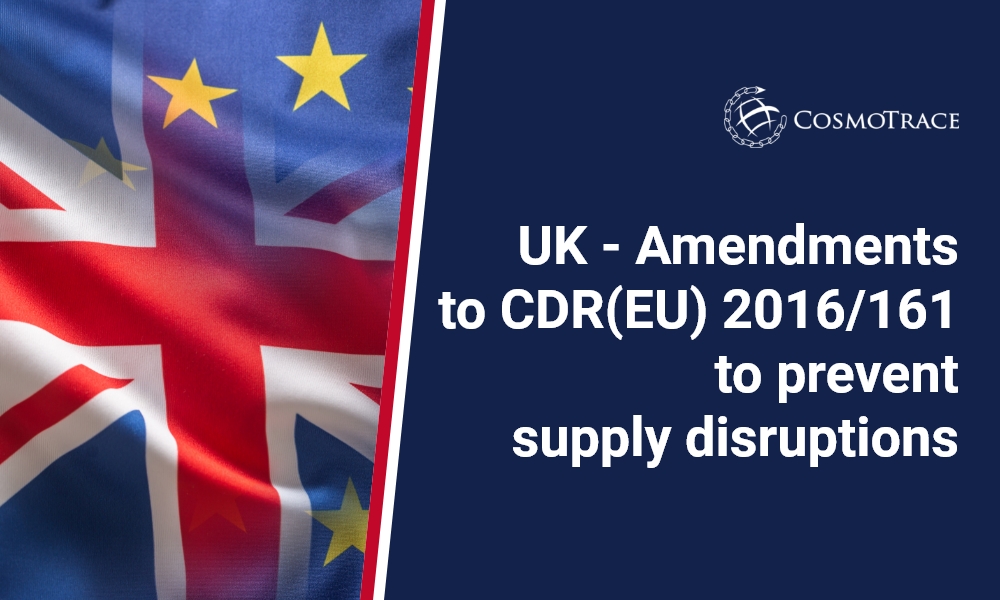 Brexit after effects on the pharmaceutical sector, along with other industries is going to have unrivaled variability owing to the fact that the markets of Northern Ireland, Cyprus, Ireland and Malta are heavily dependent on the supply going through United Kingdom.

To prevent the reintroduction of exported medicines into the EU single market, Article 22(a) of Commission Delegated Regulation (EU) 2016/161 was amended to oblige wholesalers to decommission the unique identifier on all medicines they export outside the EU before they are exported. Under this amendment, the exported medicines if subsequently re-imported into the EU must meet the Directive 2001/83/EC and a new unique identifier affixed and uploaded to the repositories system.

In January 2021, it was agreed that this Regulation will enter into force from 1 January 2022 as a matter of urgency ending the current derogation on 31 December 2021. However, since the wholesalers were not holding a manufacturing and importation authorization in these markets, they were unable to meet the importation requirements laid down in Directive 2001/83/EC and Delegated Regulation (EU) 2016/161. This led to extending the current derogation from the obligation to decommission the unique identifier when medicinal products are exported to the United Kingdom from the EEA for a further three years.

1st February 2020 - The United Kingdom withdrew from the European Union and became a separate entity with a transition period ending on 31 December 2020.

1st January 2021 - EU FMD no longer applies to the United Kingdom. Due to traditional supply routes through Great Britain to other countries where EU FMD still applies, notably Cyprus, Malta, Ireland, and Northern Ireland, the European Commission and the MHRA have provided relative guidance.

2nd January 2021 - United Kingdom – The Medicines and Healthcare products Regulatory Agency (MHRA) updated its guidance on FMD requirements in line with various UK Marketing Authorization types. The MHRA stated that the government is committed to exploring all options, including consultation, for a national system.

The presence of a unique identifier on the medicinal products imported into Northern Ireland, Cyprus, Ireland, and Malta is an essential requirement for ensuring a high level of public health protection in those countries but since the medicinal products are also imported in these countries from Great Britain, wholesalers’ readiness and connection to the Union repository system play a crucial part in this.

The need for extension

Also, as the Delegated Regulation (EU) 2016/161 require wholesalers to verify and decommission the unique identifiers, it was important for the wholesales to be prepared and connected to the Union repository system to perform the same. Since those wholesalers are not connected to the Union repository system, it became essential to grant an exceptional derogation from the requirement to decommission the unique identifiers of a medicinal product to provide more time to these wholesalers.

The EU Commission wants to make sure that the medicines intended for the Northern Irish, Cypriot, Irish and Maltese markets must carry safety features uploaded in the EU repository system.

For these reasons, the Commission has decided to continue to waive the obligation to decommission the unique identifier when medicines are distributed to the United Kingdom for a period of three more years to ensure the supply of medicines in small markets dependent on the United Kingdom is not disrupted.

Waiving the requirement to decommission the unique identifier on medicines when exported to the United Kingdom without appropriate safeguards creates a risk of falsification and reintroduction of these medicines into the markets of EU Member States other than Cyprus, Ireland and Malta.

In order to achieve the objective and stay clear of the associated risks, the wholesalers must demilitarize the identity of all medicines before their export in the outskirts of Europe.

Summary of the legal updates for the corresponding regulations

The definition of an ‘active unique identifier’ in Article 3 of Delegated Regulation (EU) 2016/161 is amended to exclude unique identifiers on medicines intended for the United Kingdom market and scanned in a Member State other than Cyprus, Ireland and Malta.

Article 20 is amended to require wholesalers to verify the presence of the safety features on shipments received from manufacturers, marketing authorization holders and designated wholesalers.

Article 22(a) is amended to exceptionally extend the derogation from the obligation to decommission the unique identifier when medicinal products are exported to the United Kingdom from "EEA" for a further three years. (Until 31st December 2024)

Article 26 is amended to allow the United Kingdom supervisory authority the possibility to waive the requirement to decommission the unique identifier on medicines supplied to the entities listed in Article 23 for three years. (Until 31st December 2024)

Article 32(1), Point b, is amended to clarify that repositories outside the European Economic Area cannot be connected to the EU repository system.

This information is being provided ‘As Is’ with no claims of suitability for a particular purpose. It represents just one possible interpretation of information available in the public domain or through membership organizations, partners and that interpretation is subject to change. This information does not constitute legal advice. Users must refer to the source material for the complete requirements and form their own interpretation before making business decisions. Please use the references below to follow the updates at the source.

Our entire team at CosmoTrace has kept up with all the changing updates and is aware as well as equipped to navigate through the relevant requirements. Our goal is to help manufacturers operating in the Kazakhstan market achieve serialization compliance.  We can assist your business prepare for all the upcoming deadlines with complete Serialization Project Management and Implementation. If you have questions or would like to know more about the Kazakhstan serialization regulations, just get in touch and we can assist.