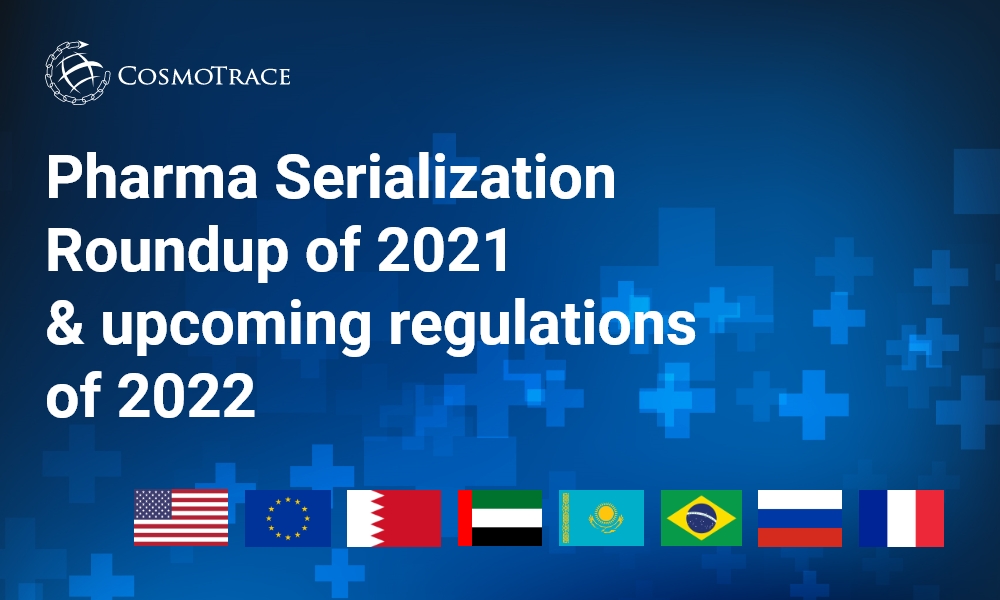 The pharmaceutical industry like every industry has faced various challenges in the year 2021 which were closely related to the COVID-19 pandemic and its results. The pandemic is believed to have added extra pressure on the supply chain due to shortage in labor and increase in production of the drugs. In order to reduce the risk of counterfeit product, certain developments were made across the globe to strengthen the current rules and to implement new rules in the field of serialization.

In this article, we will have a look at a few of the major highlights of 2021 in the pharmaceutical industry related to traceability & serialization and focus on the upcoming 2022 regulations.

EU-MDR Regulation
The major development related to serialization and traceability was seen in the Medical Device sector last year. The EU MDR is a new set of regulations that came into effect on 26th May 2021, following a 4-year transition period after being adopted in May 2017. It aims to improve the safety and performance of the medical devices throughout their lifecycle by tightening up the requirements and adding more emphasis on the market vigilance which was missing when the previous MDD (Medical Devices Directive) law was passed in 1992.
The EUDAMED database is still under development and is expected to be released to the market with all its 6 modules being fully functional by the mid of 2022.

EMVO Alerts
EMVO implemented its Alert Management System (AMS) last year to maximize the efficiency of the alerts in the EMVS. It is composed of AMS hub which connects the OBPs directly to the various National AMSs to allow the end-to-end communication between all stakeholders to investigate alerts. The pilot phase in PRD environment started in October’21 followed by the System Acceptance Testing (SAT) in September’21.

RUSSIA Serialization
After the success of serialization & aggregation of pharmaceutical products, Russia decided to start the project for nutritional supplements labeling in 2021. The entire system is being operated by CRPT (The same organization that manages the MDLP). The pilot project was started in May’2021 and will continue till the end of August 2022 in which 132 companies are expected to participate.

US DSCSA
As per the recent update from Cardinal (a major wholesaler of the US Market), in order to prepare for the DSCSA 2023 deadline they have mandated the receipt of Transaction Statement as a part of the shipment report from the manufacturer to Cardinal. They have stated that no shipment reports will be accepted without the inclusion of Transaction Statement after the end of December’2021.

BAHRAIN
The track & trace regulation for Bahrain were signed into law in 2017 following a series of events implementing the regulation by October’2021. However, the deadline was extended by 90 days till the end of December’2021 to address the current supply chain challenges. Further developments like aggregation requirements and other improvements are expected to take place in 2022.

FRANCE
The health ministry of France has proposed changes to the national product coding scheme to the European Commission on which feedback is awaited. The proposed coding scheme is not aligned with the GS1 global standards or with EU FMD requirements and hence can lead to several changes in the way products are being printed and sold in France.

In addition to these major developments, 2021 also saw significant decisions being made at various markets for moving towards traceability. Following are the markets which are all set to implement serialization in the year 2022.

BRAZIL
Being one of the largest economies in Latin America, Brazil will join Russia, the EU, and many other countries for mandating serialization in its pharma supply chain in April 2022. Brazil’s legislation has a complex set of requirements for putting into effect their serialization and reporting processes in order to achieve traceability. Deadline for implementation of serialization for all products and reporting to the national drug control system - Sistema Nacional de Controle de Medicamentos(SNCM) is 28th April 2022.
See our blog for more details

KAZAKHSTAN
The problem of tracking counterfeit drugs in former Soviet republics has become tedious with the former unorganized approach. Kazakhstan faces issues of having a high number of counterfeit drugs, demand for generics, drug shortages and increased online buying have further fueled the sale of counterfeit drugs. To overcome this, the government of Kazakhstan has planned to start a phase wise serialization implementation from May’2022.
See our blog for more details

UAE
As per the latest version of track and trace guidelines by the Ministry of Health and Prevention (MOHAP), the core objectives are to secure products, safety for patients, and visibility in the supply chain. UAE has started implementing the 2D Barcode & Serialization requirements on the pack since December’21 but the deadline for reporting this information to Tatmeen is 13th December 2022 now.
See our blog for more details

Apart from these regulations, we are also expecting additional developments related to Serialization regulations in China, India & South Korea this year. However, the clear timelines and exact requirements are awaited.

As Serialization Consulting & Implementation Experts, our focus is on delivering the absolute best serialization support by offering long-term serialization and sustainability strategies and providing forward-thinking industry solutions.
We provide end-to-end serialization services tailored to your needs to cover different market requirements. We create a strategic value chain by aligning to the business goals and managing schedule, budget, quality, resources, and risks associated with it to give your company an edge over your competitors.